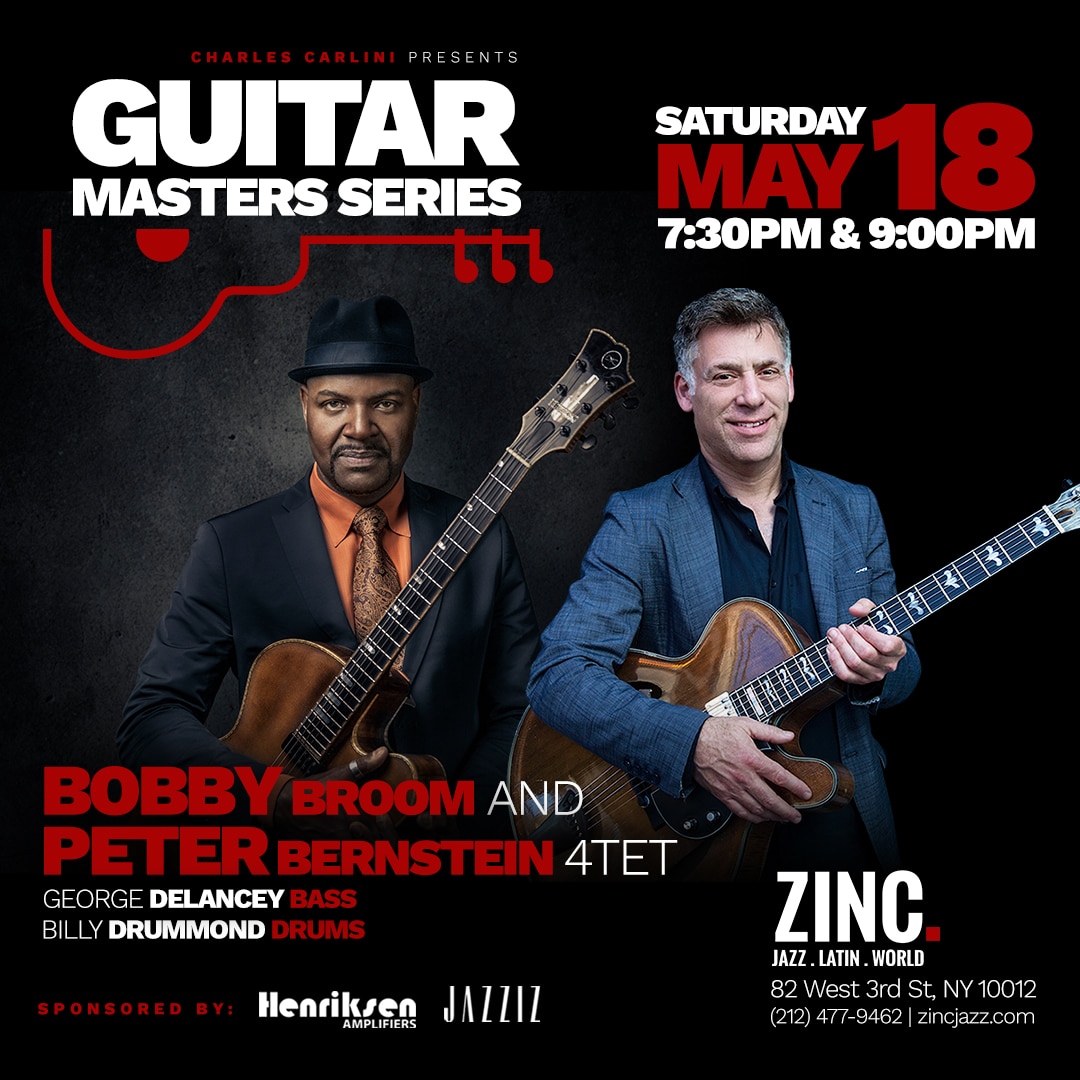 “Mr. Bernstein is a fluidly improvising guitarist in the post-bop tradition, with control over harmony and a beautiful sound.” —The New York Times

Born in Harlem and raised on the Upper West Side of NYC, Bobby Broom took up the guitar at age 12 and five years later in 1977, made his first appearance with Sonny Rollins and Donald Byrd at Carnegie Hall. He went on to tour regularly and record with Rollins from 1981 to ‘86 and again, more recently, from 2005 to ‘10. During his early years, Bobby also performed and recorded with trumpeters Tom Browne and Hugh Masekela; pianists Weldon Irvine and Dave Grusin, and Charlie Parker pianists Al Haig and Walter Bishop, Jr.

Heralded as “one of the most musical guitarists of our times,” by author and jazz critic Ted Gioia, Bobby has spent the new millennium focusing on his musical output as a leader. He has recorded with both his Bobby Broom Trio and the disbanded, Deep Blue Organ Trio for the Premonition, Delmark and Origin labels. His Plays for Monk was released in spring 2009, The Way I Play in April 2008, and Deep Blue’s Wonderfu1! in 2011 and Folk Music in 2007. Bobby was recognized as one of the top guitarists in Down Beat magazine’s annual Critics Poll for 3 years, from 2012–2014. His Deep Blue CD, Wonderfu1!, reached number one on both US national jazz radio charts. His latest BBT release, My Shining Hour (Origin, 2014), received a New York Times review and placed at number three on the US national jazz radio chart. Throughout his career, Broom has continued to garner praise and encouragement from his peers and elders. Sonny Rollins has said, “Bobby is the reason I like the guitar.” Fellow guitarists also laud Broom, including those that he admires such as John Scofield, George Benson, and Pat Metheny, who cited Broom’s 2007 Song and Dance recording as “one of the best (jazz) guitar trio records ever!”

Jazz guitarist Peter Bernstein has been a part of the jazz scene in New York and abroad since 1989. During that time he has participated in over 80 recordings and numerous festival, concert and club performances with musicians from all generations. As a leader, Peter has released nine albums and a DVD, Live at Smoke.

From 1995 through 1997, Peter was a member of Joshua Redman’s band and played on Redman’s Freedom in the Groove CD. He played with Diana Krall’s quartet from 1999 through 2001 and with Dr. Lonnie Smith, the legendary organist who made his debut on the George Benson Cookbook albums. He has also recorded five CDs with organist Melvin Rhyne, known for his association with Wes Montgomery. In addition, Peter has appeared in groups led by Nicholas Payton, Sonny Rollins, Lee Konitz, Tom Harrell, and Eric Alexander.