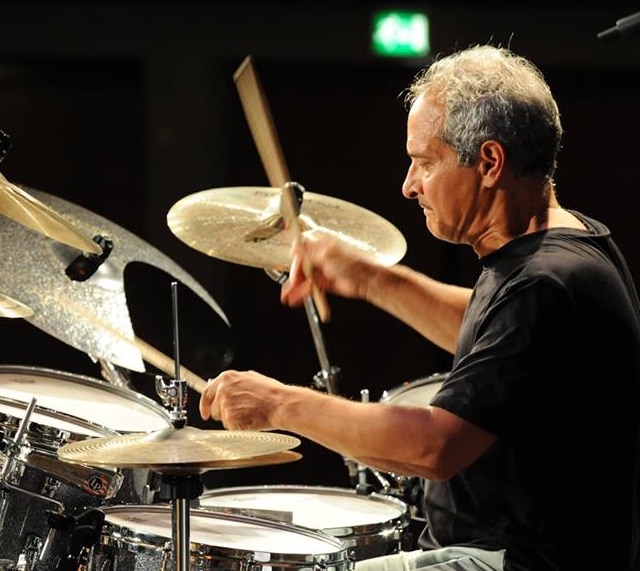 Grammy Award-winning drummer Robby Ameen has lived in New York City since the early eighties and compiled a recording career stretching from Dizzy Gillespie to Paul Simon while maintaining a more than twenty-year relationship with Latin icon Ruben Blades as a member of Seis del Solar. Although he is of Lebanese origin, Robby is best known for the unique and powerful Afro-Cuban jazz style he has developed. Growing up in New Haven, Connecticut, Robby was able to take advantage of his proximity to New York City by going to clubs and hearing many of the great jazz masters at a very young age. At the same time, he was involved in the local jazz and latin scene, as well as later attending Yale University, where he received a BA in literature. His jazz roots were strongly influenced by his studies with the great Ed Blackwell in high school, while in college he studied classical percussion with the renowned Fred Hinger. Upon moving to New York, Robby began recording with flutist Dave Valentin and soon afterward Ruben Blades, who was the first salsa singer to add a full-time drummer to his band, Seis del Solar. Another one of his early recordings was “New Faces” with Dizzy Gillespie, about whom Dizzy said in JazzTimes “Just the other day I made a record with a Lebanese drummer – b-a-a-d! He had so much happening, and it keeps going, you know?” On the Latin scene, Robby has recorded many records with Eddie Palmieri, as well as having toured or recorded with such luminaries as Mongo Santamaria, Paquito D’Rivera, Hilton Ruiz, and Willie Colon among many others.

Robby was the drummer at Marc Anthony’s historic first solo concert at Madison Square Garden. Another one of Robby’s longstanding relationships has been with producer-composer Kip Hanrahan, with whom he has been recording and touring since 1987. He was also the drummer for Paul Simon’s “Capeman”, with whom he worked through the long rehearsal period up until the recordings and the actual show, as well as VH1’s “Storytellers” and part of the BAM’s Paul Simon retrospective.. Robby also has toured and recorded extensively with Jack Bruce’s “Cuicoland Express” band and is a longtime member of Conrad Herwig’s oft Grammy-nominated ” Latin Side of …” band. As a co-leader, Robby has recorded three records with the “El Negro and Robby Band” alongside Horacio “el Negro” Hernandez. He also helped found the latin-jazz power trio “Overproof.” Most recently Robby has released his “Days In The Life” solo project, composing and arranging most of the music. Robby is the co-author with Lincoln Goines of the best-selling instructional book and CD: Funkifying the Clave: Afro Cuban Grooves for Bass and Drums, which has sold over 40,000 copies worldwide and recently released the DVD Funkifying the Clave. Robby is an active clinician, performing at all the major drum festivals, including Modern Drummer Day, PAS, the Montreal DrumFest, FrankfurtMesse, and NAMM, to name a few, Some of his various TV appearances include The Tonight Show, 60 Minutes, Amnesty International Concerts, Cinemax’s “A Latino Special: feat. Jerry Garcia,” “The Return of Ruben Blades” film, Good Morning America, PBS’ Legends of Jazz, Europe’s Rockpalast and Later with Jools Holland. n addition, Robby is a longtime New York session player having done numerous jingles, TV music, and film scores with such composers as Dave Grusin, Carlos Franzetti, and Howard Shore, as well as having been the drummer for the “Sex and the City” series. Feature articles about Robby have appeared in such magazines as Modern Drummer, Drumhead Magazine, Rhythm, Latin Beat, Batteur, Percussionisti, among many others. Recently, Robby has been included in the New Grove Dictionary of Jazz.