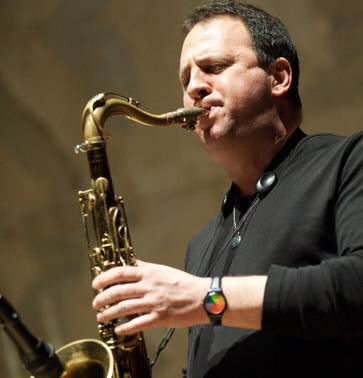 Saxophonist Peter Brainin has distinguished himself over the past 15 years as a member of many important bands, and also as a composer and leader of his own adventurous projects outstanding leadership.  His work as a sideman includes 10 years (1989 – 1999) with legendary pianist Hilton Ruiz. He toured the States and Europe in 1992 with Mongo Santamaria and since 1995 has been a featured member of the Chico O’Farrill Afro-Cuban Jazz Orchestra. Peter has also been acclaimed for his work on Bobby Sanabria’s Grammy-nominated big band recordings. He has been recorded on over 100 c.d.’s. Other bands and artists Peter has performed and/or recorded with include: Paquito D’Rivera, Randy Brecker, Wynton Marsalis, Bebo Valdez All-Star Latin-Jazz Big Band, Joey Calderazzo Quartet, Randy Weston, Jon Faddis, and many others. Peter’s compositions and arrangements can be heard on his 2 original CD’s (“Ceremony” and “No Saints, No Sinners”) recorded with drummer/co-leader Steve Johns and which also feature the work of George Cables, Conrad Herwig, Eddie Henderson, and Ben Monder. He was twice awarded the BRIO Fellowship Award for musical composition by the Bronx Council on the Arts.