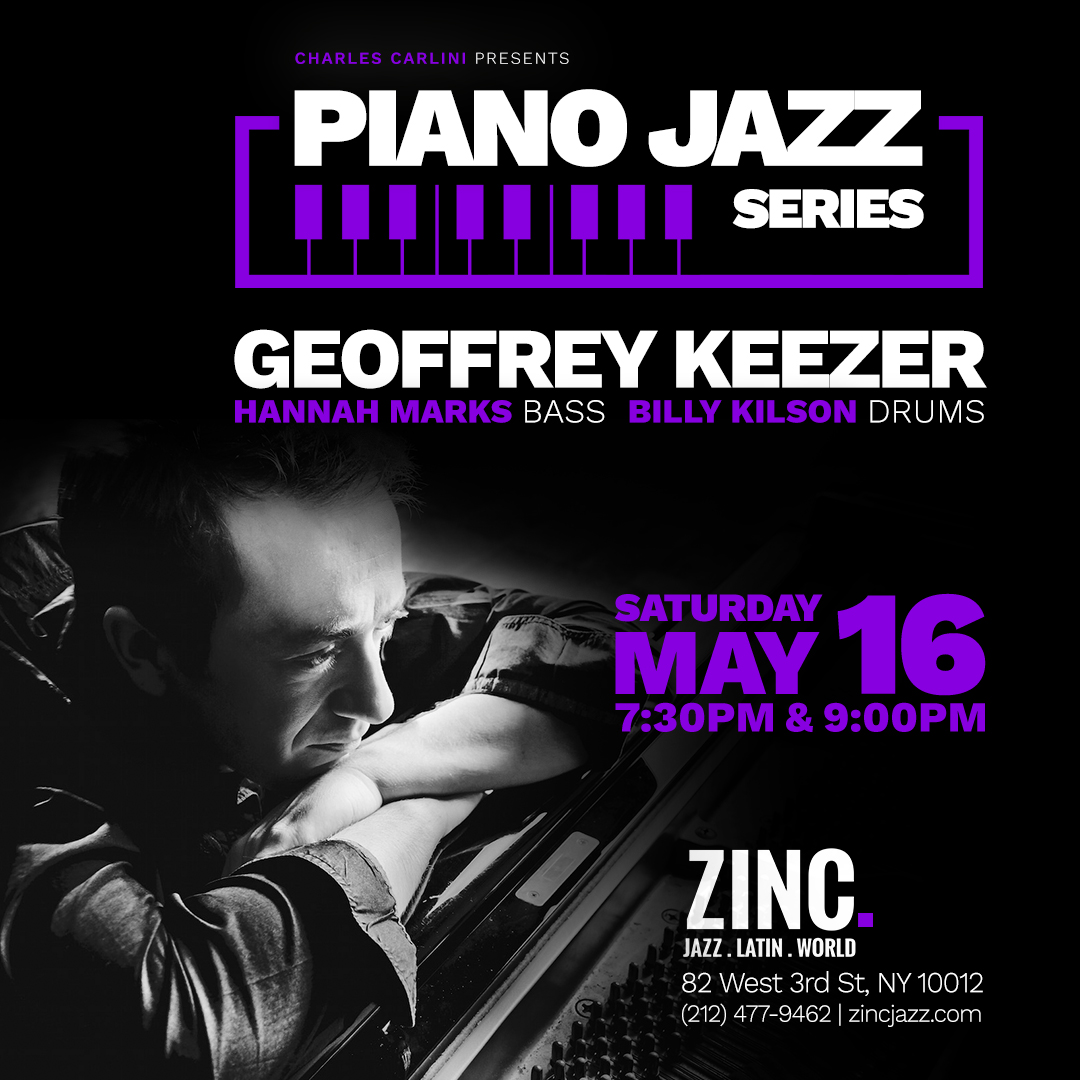 “Mr. Keezer is the kind of straight-ahead piano player you wish for: multifaceted, responsive, constantly sifting through colors and shapes, bursting with a personal and sincere enthusiasm.” —The New York Times

Acclaimed jazz pianist Geoffrey Keezer brings his trio to Zinc for a splendid evening of jazz piano on Saturday, May 16. He’s supported by bassist Hannah Marks and drummer Billy Kilson.

With his highly regarded discography, unique compositions, and acclaimed performances in a variety of configurations, multiple GRAMMY®- nominated pianist Geoffrey Keezer commands the attention typically reserved for the living legends of jazz. A native of Eau Claire, Wisconsin, Keezer

was playing in jazz clubs as a teenager, holding down the piano chair for Art Blakey at age 18, and touring in the company of Ray Brown, Joshua Redman, Diana Krall, Art Famer, Benny Golson and Barbara Hendricks in his 20s. More recently he has toured with Wayne Shorter, Dianne Reeves, David Sanborn, Chris Botti, Sting, Joe Locke, and Christian McBride; produced and arranged three GRAMMY®-nominated recordings with vocalist Denise Donatelli, and released a series of albums drawing influences from Hawaiian, Okinawan, and Afro-Peruvian folk traditions. His 2009 album Áurea (ArtistShare) was nominated for a Best Latin Jazz Album GRAMMY® award. Geoffrey’s 2013 solo piano release, Heart of the Piano (Motema Records), seeks to redefine solo jazz piano as a personal and interactive showcase of melody, energy and groove, while his latest album On My Way to You (MarKeez Records 2018) is a stunning new set of music featuring his working trio with the addition of guest vocalist Gillian Margot.

Geoffrey’s compositions have been commissioned by the Mainly Mozart Festival, Art of Elán ensemble, Saint Joseph Ballet, Zeltsman Marimba Festival, Carnegie Hall Jazz Orchestra, and Scottish National Jazz Orchestra. His music can be heard in the films What Happens in Vegas and Inhale, and in numerous TV shows including The Young and the Restless (CBS), Parks and Recreation (NBC), House of Lies (Showtime), and Casual (Hulu Original).

Time Magazine wrote, “Geoffrey has more than enough virtuosity and sheer musical wit and intelligence to weave all of his apparently disparate strands of influence into an original and compelling whole”, and pop icon Sting said “In the universe of piano players that I have been exposed to over the years, Geoffrey has proved himself to be not only a superb technician and improviser but also above and beyond this, a composer and conceptualist who can maintain the overall line and the DNA of the song in everything he plays. A musician’s musician.”